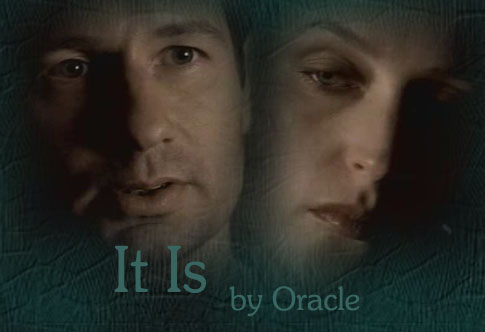 For this is what he does.
Rating: R

Key Words: Mulder/Scully Romance
Spoilers: Season Eight in general, but nothing specific except Dead/Alive.
Disclaimer: Chris Carter and 10:13 productions created Mulder and Scully, but I think they belong to their fans as well. However, I don’t want to get in any legal trouble, so I’ll say that I’m just
borrowing them. For eternity.
Archive: Gossamer, please. Email me before archiving elsewhere. I don’t see why I’d refuse.
Summary: For this is what he does.

Comments: I’ve never posted anything on the internet before. I don’t know any internet fans and none of you know me. This is all very strange because I’ve been a XF fan for years – I’m just shy.
So yeah, this story has not been beta read. In fact, it hasn’t been shown to anyone.

“Without thee were but a becalmed bark,
Whose helmsman on an ocean waste and wide
Sits mute and pale his mouldering helm beside.”

Every season she goes through this. Every night, for a week at least.

She doesn’t know why. Maybe it comes with the change in temperature, as her senses adjust, though this doesn’t always fit. Maybe it is the full moon, tugging on the liquid parts of her body as hormones swirl through her blood. Or maybe it is no more than a release, something her subconscious needs.

Only he sees the signs. From the muted terror of the first night, she knows it’s started again, and the terror only grows. Of course, she never tells him. This is the way she is. But he knows, from less smiles and clouded eyes. He knows, from her tone of voice, from the way she touches him. Even the way she eats ice cream is a sure sign. He watches her do this, every day. During good times, she turns the spoon upside down to savour the taste. In the bad times, she barely notices she’s eating. Her lack of interest in what she usually takes pleasure in, yes; this is the surest sign of all.

They make love less than they once did. Three times a week, usually, sometimes a bit more. During her bad spells, they make love every night, sometimes twice. Lovemaking is her only pleasure in these times, her only relief. It is exhausting, and sometimes she tries to refuse. She says she wants sex to be special, as though they could go back to those few months when it always was. It still is, of course, but when she says special she means perfect. She wants to make love solely for the purpose of making it.

But she can’t refuse him anything, especially this. He can’t refuse her anything either. They still speak about this sometimes, their undying love. In her bad times they barely speak at all. “Are you okay?” is a useless question. He’s known this for years. Comfort without words is his only option.

She sits on the dryer, her face in her hands. It is two o’clock in the morning. Will is asleep and so the house is silent. Of course she is not crying – she is past that now.

He sits on the laundry bench, watching her. It is the third night.

“It was the cemetery, I was standing by your gravestone. It was snowing, the middle of the day, and I was cold. It was so cold, it made me think of the mortuary, and then, there I was. You were laid out, like you were when…” she bites her lip, because this is too difficult to say, even for her. “I couldn’t breathe so I just closed my eyes. When I opened them you were gone, there was just the slab.”

The first time, he wouldn’t let her speak about her dreams. As soon as she started he cut her off.

“I want you to try and forget them,” he whispered into her neck. He pressed his hand against her bare belly. “Forget the nightmares, Scully. No more nightmares. We don’t need them any more.”

By the third time it happened, he realised his mistake. The dreams were not papers that could be filed away in the dark corner of an old office. They were not eyewitness accounts and neatly typed
reports about demons, ghosts and goblins.

They were just as vicious and ugly as these monsters. They could only be exorcised by endurance and courage. Eventually, after many battles, they would be slain.

And so he decided to let her endure the worst. He would accompany her through it all, taking as much of the load as she would give. For this is what he does.

She still sits on the dryer, but he moves from the bench. Two steps and he is standing between her legs. His fingers squeeze her bare shoulders.

This is Mulder the lover, her lover. Tender, gentle, understanding. It drives her crazy when he’s like this all the time, every day, every night. She needs him as a bastard sometimes; selfish and
arrogant, shoving heaped spoonfuls of self-pity down her throat.

Except in these times, when she can only hear his voice, and the ticking of the clock in the hall.

“Back to bed?” he asks. He knows better than to command.

“I want you here,” she says, trailing her fingertips from his navel to the base of his adam’s apple. She speaks with a voice that undoes him, as it always does.

They were sitting beside the Potomac, holding hands.

It was a clear, chilly day, the wind picking up a few strands of her hair at a time, leaving them in untidy heaps on her head. They had walked from the restaurant to sit beside the river. It was
sunset, a pale pink impressionist affair that didn’t compare to her vibrant colouring.

“I love you,” she said, as they sat on their bench beside the murky river.

They were only a week away from the end of this part of their lives.

He kisses her, as only he can kiss her, and she responds with her kisses, as only she can. She wraps her arms around his waist and pulls him against her. Soon, he is inside her, and his fingertips
flutter across her back. Her nails dig into his. He treats her like porcelain and she is hard as diamond.

They have the rest of their lives to do this. All of the furniture in their house is free for them to christen. They can make love. They can go out to dinner. They can tuck their son into bed. They
can choose to go hiking on the weekends or curl up together and watch TV.

Perhaps, one day, he will be annoyed by her nightmares, and they will fight, and separate, and divorce. But this is as likely as the oceans drying up, leaving nothing but piles of gritty salt and dying fish.

They have picked out china patterns and visited antique stores, arguing about prices and styles. Each paint colour, each roof tile, bears their stamp. The bond between them remains without even a
hairline crack. Together, they have created something that they will never allow to crumble.

This is how it is, and the way it must be.

Since this is my first fanfic, I don’t know what getting feedback is like. Please send it to me so I can find out.

My email address is: apollostemple@yahoo.com